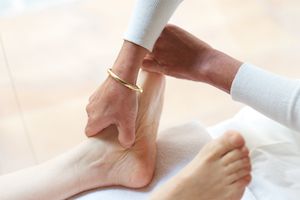 Thus, the findings showed that reflexological stimulation induced a somatosensory process corresponding to the stimulated reflex area and that a neuroimaging approach can be used to examine the basis of reflexology effects.

Understanding the role of stimulation in reflexology: development and testing of a robotic device

Reflexology is a common choice of women with breast cancer as supportive care during treatment. It involves stimulation of specific locations of the feet called reflexes using a specialised walking motion with the thumb of the reflexologist.

Reflexology has shown potential for the successful management of cancer and treatment-related symptoms and improvement in physical functioning; however to date, the mechanism of action for these improvements is unknown.
One confounder to the study of reflexology is the 'human factor'. To study the effects of the stimulation of the reflexes independent of the 'human factor', there is a need for an alternative method for the delivery of reflexology.
The objective of this work was to design and create a robotic reflexology device that would deliver a breast cancer-specific reflexology protocol to the feet of patients.
A prototype robotic reflexology device was developed and tested for feasibility, safety and acceptability with breast cancer survivors (n= 13), and preliminary efficacy in symptom management and enhanced functional status with a sample of women undergoing chemotherapy for breast cancer (n= 13).

Safety, feasibility and acceptability were established, and significant improvements from pre- to post-device-delivered reflexology were seen in symptom severity among women on chemotherapy.